“ I think the most important is being "mad" to climbing.
You have to really love climbing, otherwise you will give up with climbing after some time.”
Adam Ondra 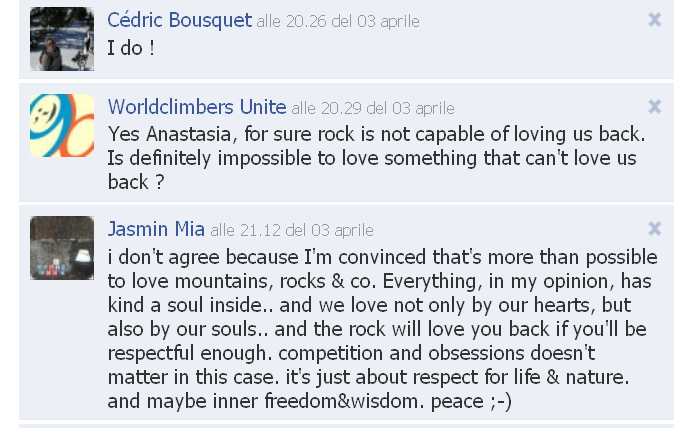 Is this love possible just for ... Adam Ondra (and other superstrong climbers) or for us normal climbers too ? For all of us ?

What do You think ?

Even if You work 12 hours a day, have a family to manage and so many problems to solve.

If both of You climb, and not so easily, no more than 6as.

Is it possible for You too to really love climbing ?

In October 2009 I realised a long goal of mine whilst on Chemo, to climb the Nowra classic "Trigga Nigga" 25. I picked this climb because it required me to work on both my endurance and strength, the two aspects of my climbing most damaged by the chemo therapy. At the time I chose TN as a goal I was having trouble walking up flights of stairs so in the end it was an incredibly challenging goal. In the end I suspect the process was much more important for me than the actual achieving of the goal. So enjoy the video, and as always comments encouraged.


World Builder from BranitVFX on Vimeo.

Comment by 9b on January 23, 2010 at 11:28pm
God loves with a great love the man whose heart is bursting with a passion for the "impossible." ~William Booth

APRICOT, short film by Ben Briand (sponsored by his incredible acto... from Moonwalk Films on Vimeo.

Comment by 9b on February 22, 2010 at 8:38pm
" The more I travel the more I meet people and the more I hear about bitchiness, about people who don’t like certain other people.
There are a variety of reasons for why people don’t like other people, and it’s a fact of life that not everyone is going to get on really well with everyone else, but in climbing people really seem to take a dislike to one another.
Perhaps it’s because they are all so passionate about rock climbing and this is what they have disagreements about, but I think it’s a bad way to be.
In my mind, it would be better if everyone could act as a positive support for everyone else and encourage them to improve, adapt, and push things forward.
That probably sounds far too idealistic but I’m sure things could be more like that than they currently are.
The one theme that unites all the top climbers I meet is their love for rock climbing.
They just want to go out and climb.
They don’t really care about 8a.nu, internet chat, magazine reports or chatting BS about climbing, they just love rock climbing.
They couldn’t care less if they never reported anything else they did or if no one knew what they had climbed, because they really only do it for themselves.
I’m sure there are exceptions to this, but for the most part people choose this lifestyle because it’s what they love.
I also think the general public are too quick to judge the achievements of the top guys without really knowing or understanding anything about them.
This is also a great shame because I’m sure if people were to know these guys personally they would have a completely different opinion.
I’m not guilt free, I realise that I’ve been part of this in the past, but it’s something I realised was a bad mistake and have tried to learn from the mistake.
I’m not judging anyone or trying to make moral statements about anyone’s opinion.
I just want to encourage everyone, avoid slagging people off, try to remain positive and continue to love rock climbing.
I hope that everyone else can do the same because loving rock climbing is the glue that binds us all together. "
Unclesomebody